To celebrate the public launch of The Modern Elder Academy “a place to reset, restore and repurpose your life”, we’re publishing this article by Next For Me’s founder Jeff Tidwell. The article was originally published on Forbes.

Chip Conley is a longtime compadre (he was an advisor to my vacation rental business on Kauai – Aloha Dude, starting in 2000). I would visit him when work would take me to San Francisco and catch up. He had a highly public profile as the founder of Joie de Vivre Hospitality, the California boutique hotel firm.

Chip Conley at The Modern Elder Academy in Baja.

Chip also was publishing books. First was The Rebel Rules: Daring To Be Yourself In Business (which is when he caught my attention) about making a different kind of company with the employees at the center. He followed with more in the business category PEAK, Emotional Equations, and Marketing Matters.

When I caught up with him again before a talk I was giving he told me about his newest book Wisdom @ Work: The Making Of A Modern Elder, which follows his education when brought in as a mentor to the CEO of airbnb and how he found himself being mentored by employees considerably younger than he was. ‘Inter-generational’ mentoring. He first covered the topic in the Harvard Business Review. The book will be out in September of this year.

While all of this was going on at airbnb, Chip had a larger vision. He wondered if what he was experiencing at airbnb could have a curriculum or process around it. Maybe an academy where people would come for a ‘gap experience’ while reconsidering the next phase of their lives. Not unlike a gap year that students sometimes take after college.

Chip is no stranger to empowering, dramatic environments where self-realization and growth are baked into our California psyche. He serves on the board for Esalen, a retreat on the steep cliffs above Big Sur where seekers have been coming since 1962 and is considered the birthplace of the human potential movement. He also serves on the board of Burning Man, the arts festival in the desert which has a set of 10 principles which include self-reliance, gifting and radical expression. 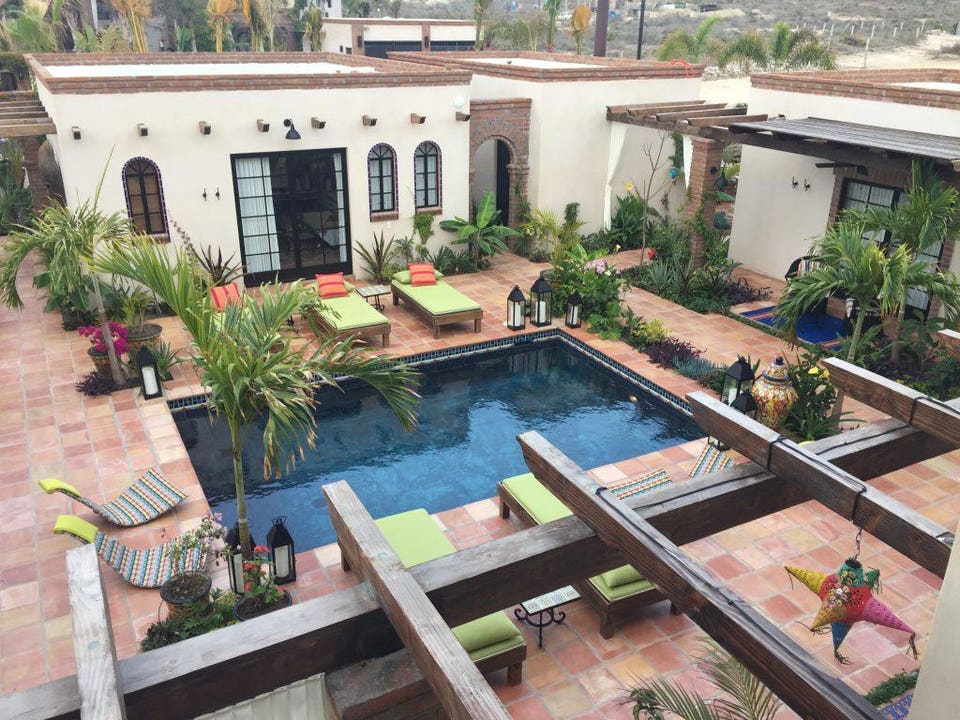 The Courtyard at The Modern Elder Academy

That day, he showed me a drone video of 4 plots of land on the beach in Baja. The spot was Pescadero specifically, which is just south of the new fashionable destination Todos Santos and an hour north of Cabo San Lucas. It was in various states of creation. His longtime interior designer from Joie de Vivre Oren Bronstein was on-site doing his magic.

He described a program called The Modern Elder Academy. Starting at the beginning of 2018 they would be hosting ‘cohorts’ in one week programs and a two week ‘immersion’. He asked if I’d like to be one of the beta testers. I jumped at the chance.

The academy is taking 150 people through this beta program the first half of this year and then will be open to the public in November. There will be a site with more detailed information in June.

When we spoke it was October and I was slated to attend in March. In the interim I had started Next For Me and was by then completely consumed by the new company and everything that went with it. But it was all becoming pretty ‘meta’ and seemed to fit together. Next For Me was distributing news about an evolving generation and the Modern Elder Academy was the philosophical and tactical step into the next chapter.

People were actually figuring out what was next for them at the Academy.

The team intentionally didn’t prepare us for what the two week program would be. I had promised to keep my mind open and go with it. What I also wasn’t prepared for was the extraordinary comfort and attention to detail that Chip, Oren and the on-site team had created. Aesthetically it was a simple modern Mexican motif. There are open courtyards with pools and fountains and open living spaces for informal interactions. The main house is a classic Spanish two story with a big kitchen, lap pool and outdoor dining.

Helping Chef Tony in the kitchen.

The food was stunning. Chef Tony is a joyful and careful chef who combined traditional Mexican cuisine with modern nods to the local organic ingredients and fish. The region is known for its rich soil and vast organic farms supplying Whole Foods in the states with tomatoes, chilis and other vegetables. A shared activity for our group was making the bread for the day using a simple recipe from NY Times food writer Mark Bittman.

There were 8 of us participating including, an arts administrator, a Scandinavian innovation envoy, a teacher from the roughest part of Los Angeles, a high-powered marketing executive, a woman creating a wellness business in the midwest, a realtor, a hospitality consultant on the other side of a cancer diagnosis and me.

With the crashing of the waves providing a constant rhythmic backdrop during morning meditation and yoga, we were ready to begin.

Our guide for the two weeks was an exceptional professional coach, Vanda Marlow. She kept it light and flexible given the often heavy topics we were looking at straight on. The first week was an exploration about who you have been. We took a look at significant events that shaped who we were and even how they might not be serving us so well.

With a foundation of basic self-understanding we were prepared for the mid-program ‘vision quest.’ For the vision quest you are left to yourself in the desert in a teepee with a meditation pillow for 9 hours. It is not my nature to be confined and limited in my freedom. Of course I could have left the tent if I really wanted to (I could hear the waves crashing somewhere nearby), but I stuck it out. It was cathartic and peaceful. I worked some ‘stuff’ out and was glad I did.

Partners in evolution: Alex, Shilpa and me at the Modern Elder Academy

We took a break for a day and played with our fellow cohorts. Swimming, adventuring and not talking much about what we’d been through. I think we all appreciated the space to let it settle in.

By Monday morning we were all back on the meditation pillows for the sunrise, then ready to tackle how we could evolve now that we knew who we were and where we had been.

For the second week we were guided through some exercises that sharpened our mentoring skills, listening techniques, mindset management, a purpose statement (what a surprise) and my favorite ‘altering your perspective’. This technique showed me how the slightest adjustment to your perspective of an issue can shift the whole thing and open up new ways to look at it and often new possibilities.

We wrapped the week up with a ritual at the beach and when completed behind us began a surprise mariachi band followed by a wonderful dinner.

I left a more evolved and rested person. I also left with a deeper understanding of what people were looking for in this next phase. I heard the expression ‘Next For Me’ multiple times each day as we worked through our program. I left feeling that although there may be an existential crisis looming for my generation around work and evolutionary development, I believe there is hope for us and we have it in us to create a movement that finds a natural place for people over 50.

Thank you to the first class team at the academy – Gina, Christine, Saul, Tony. Vanda, Karla and Chico the Dog – we couldn’t have done it without you.

Find out more about The Modern Elder Academy.

Disclaimer: Chip Conley is and advisor and investor in Next For Me.

He Dropped Out in Bali